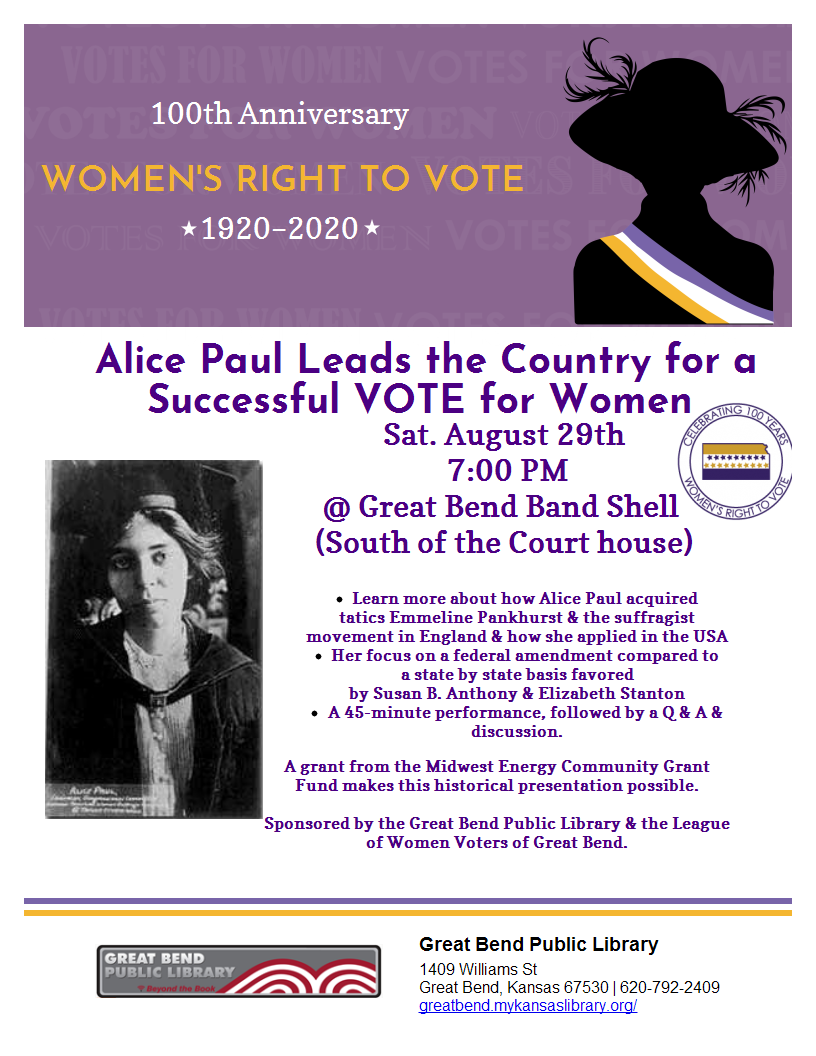 Irene Nielsen from Historical Echoes will perform as Alice Paul to tell her story to bring about Women's Sufferage.
At the Great Bend Band Shell @ 7pm

You are invited to interact and hear a first-person live presentation of Alice Paul, and the struggle for women to be able to vote.  The live performance will be held at the Court House Bandshell, August 29th at  7 pm.  Contact Erin Ferguson, Library Adult Services staff at 620-792-2409 for details.

Alice Paul discovered the effectiveness of a modified militancy while studying in England.  She learned tactics from Emmeline Pankhurst that she modified for the US Suffragette movement success in America. Not looking to be popular but dedicated to the right for women’s vote, Dr. Paul took on the women’s establishment that had floundered for 72 years.

Paul sought action and proceeded to use President Wilson’s own campaign words against his resistance for the vote for women.  Paul crafted an effective Silent Sentinel approach outside the White House and organized the media coverage for national news.  Her Sentinels were arrested, imprisoned, and abused for merely standing outside the White House gates in protest.

Previous leaders, Susan B. Anthony and Elizabeth Cady Stanton, clung to the state by state approach and rallied against Paul’s Federalist actions – until Paul’s group succeeded in Congress.  Western states had allowed the vote for women as they were admitted to statehood.  The threat of a massive women’s vote from these states succeeded in changing the political will.

Paul dedicated her total life to the rights of women at home and on the national stage.  After successfully leading the passage of the 19th Amendment, she returned to school for another doctorate and became the original author of the Equal Rights Amendment (ERA).  A grant from Midwest Energy Community Grant Fund makes this historical presentation possible.

The performance will be followed by questions and discussions.  Dr. Paul is performed by Dr. Nielsen, first-person performer with Historical Echoes.  Historical Echoes organized in 2012 to bring the lives of history about real women who challenged and changed history. Additional performance dates and information is available at www.historical-echoes.com.  The organization also has an Institute for training future First-person performers at www.institute.historical-echoes.com.

Please practice social distancing and wear your mask while in attendance.  Protect your neighbors and yourself during these uncertain times.